In Numark’s extensive product line, the Mixtrack controllers, which include the original, the Pro, and now the Pro II, have been a consistent value product: solid, if not professional-looking, construction for the price, ease of use, and decent integration with Serato software. The latest, the Numark Mixtrack Pro II, essentially picks up where the earlier two models left off and goes farther, including more modern and convenient functionality.

Structurally, the Mixtrack Pro II is streamlined and equipped with a greater selection of tools. The overall look is thinner and more professional and includes 16 backlit, multifunction drum pads, touch-activated platters, and features that integrate better with the computer, such as hot cues, looping, effects, controls, a built-in audio interface, and Serato DJ Intro. 16 effects controls, a full mixer section, a crossfader, 3-band EQ, and easily-navigable music library round out its functions. For the beginner, this standard combination better engenders less-predictable performance, allowing the user to create loops, use samples, and efficiently move between modes. Numark claims that the DJ has more time to think about the music instead of the functionality of the controller.

On this account, Numark is right on the money. Overall, the Mixtrack Pro II is extremely easy to set up: think plug-and-play ease. All you have to do is add the speaker, microphone, or headphones to the controller and then plug the controller into your computer. Scratching or stopping a track is possible just by touching the tops of the platters; for a pitch adjustment, just move the platter side to side at the edge. Additionally, it uses MIDI, meaning it’s compatible with more DJ programs than just Serato DJ Intro.

Compared to the two Mixtrack controllers, the Pro 2 is an upgrade: setup is less of a headache, the device aligns better with Serato, and browsing tracks is easier. Beyond these aspects, however, the Mixtrack Pro II shows itself clearly as a value controller: sufficient, if not good, at the basics but not what a professional. And, for the DJ looking to get started, and eventually move up to something better, that’s perfectly fine. 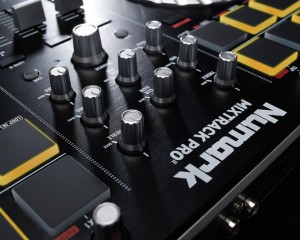 Along with performance pads not responding to velocity, its capabilities (cues, samples, loops, and effects) are limited. It can detect BPM and lets the user tap it out, while loops are handled by the top four pad buttons (automatic) and bottom four (manual). For the former, however, the controller only goes up to 16 (and not 32) subdivided beats.

Cues, with three per deck, share the same bottom four buttons and leave an option for a fourth temporary cue. Samples are additionally triggered from the bottom pads. The user, essentially, can load a track with three cue points and include samples through these pads.

More advanced DJ functions, unfortunately, aren’t present. While the basics are certainly consistent, the DJ is restricted to two decks. Recording, as well, isn’t offered, and the backlit display isn’t as bright as it could be for performances.