Whether it’s iPad control, video playback functionality, or novel ways to launch samples, updates to the traditional format of DJ software have been few and far between in the past few years. When I first encountered The One DJ Software by Audio Artery at NAMM 2012, the project was still a long way from complete, but I knew the developers were really onto something. For the first time, I saw a software team pulling in the best parts from all aspects of music creation and playback to create something new and exciting to compete with current industry staples. Now, a little less than two years later, I’m pleased to say The One is unlike any other software on the market. Sure, upon first glance The One looks just like Virtual DJ, Mixvibes Cross, or even Traktor and Serato. It has to, at least to encourage familiarity and convince the masses to give it a try. Once inside, however, the vast possibilities unique to The One really begin to shine. First, setup for The One is incredibly easy thanks to a quick click-and-learn MIDI mapping interface, similar to that found in Ableton Live. Within five minutes I was able to get up and going with my mixer, track decks, and effects units, all mapped where I wanted them within the software. No online map-hunting or complex menu navigation required, as in Traktor. A few MIDI devices are also natively compatible with The One, and are detected automatically. The next step that really wowed me was configuring my screen’s layout. Multiple familiar schemes are built into the software, such as two decks + browser + mixer, four decks + browser + mixer, two decks + browser set up for external mixing, etc. The fact that you can create custom layout templates wasn’t what amazed me; what amazed me was that any combination of players, mixers, effects racks, and browsers is possible, and that any of these units can be duplicated infinitely. That’s right – infinite track decks, infinite mixers… the possibilities are endless. Currently saved to my computer is a layout composed of six track decks, two mixers, five effects units, and a browser. Let that sink in. What’s the point of all those units? Especially mixers – who in the world needs more than one mixer? Another awesome feature of The One is that audio routing between players, effects units, mixers, and sound cards is incredibly easy to manipulate thanks to a graphical map of audio flow which can be clicked and dragged much like the virtual patch cables in Reason. This means multiple soundcards can be used all at once for some really intense audio experimentation possibilities. Want to DJ more than one room, and perform two sets at one time? Go for it.

Another huge feature of The One is the fact that track decks in The One aren’t quite like track decks you might find in common DJ softwares. In fact, they’re more like channels in a DAW in that they each contain an individual timeline which can hold more than one audio file at a time. This means you could theoretically do all of your DJing from within one track deck, positioning songs on a common beat grid such that they melt together perfectly. Maybe you’ve made a mashup, maybe you’ve just found three or four songs that will transition well together. The point is, now you’re ready to leave the decks for a while and go party. The One DJ Software is clearly unlike any other software on the market, while remaining similar enough to EVERY software on the market to warrant significant attention from the mainstream amateur or professional DJ. In fact, it’s because The One shares concepts with so many well-loved DJ softwares – songs on a timeline as in Ableton, virtual patch cables as in Reason, extensive FX control as in Traktor – that this software is such a technical masterpiece. 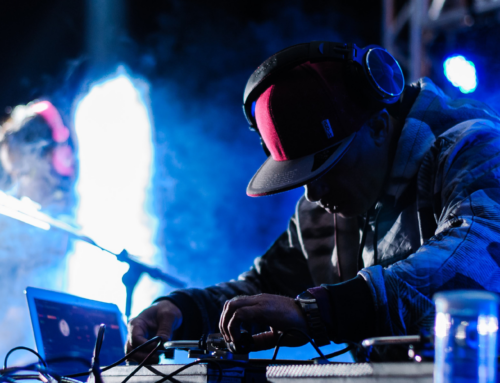